1 Samuel 19:1(KJV); And Saul spake to Jonathan his son, and to all his servants, that they should kill David. 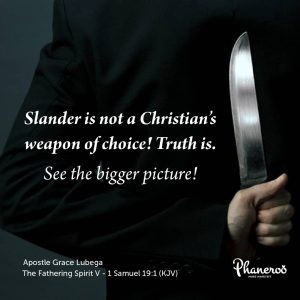 When a man or woman of God does not carry a fathering [mothering] spirit, he will always miss the bigger picture.

Take an example of the story of Saul and David. Never has a man terriby missed the bigger picture like Saul did in his single-minded determination to destroy David.

On many occasions, he sought to kill David. But who was David to Saul? Think about it for a moment. David was his son in law. David was a bosom friend to his son Jonathan. David was a great warrior who had wrought mighty victories on behalf of Israel.

Sadly, Saul did not see any of that. It was fine in his eyes to deprive his daughter of a husband, his son of a friend and Israel of a mighty fighter as long as he had his own way.

Such myopia! Such tunnel vision!

Was it really about what Saul wanted or what God wanted?

Now, Saul’s narrow sightedness is not a thing of the past. It is very evident even today.

Christians today have sought to kill fellow Christians, not with sword and spear but with words on social media; on television and on radio stations.

They do not realise that the men and women of God they criticise have people dependent on them; have assignments on their lives that need to be fulfilled; are warriors in God’s army and are zealous in the fight against the enemy.

Think about the spirits you will wound in the process; the ones who might never return to church because of your actions and the ones who will be exposed to the enemy [the Philistine] because you targeted a warrior in God’s army.

Slander should never be a Christian’s weapon of choice!Truth is the weapon. Preach your truth!

When Paul understood this, he said, ‘notwithstanding, every way, whether in pretence, or in truth, Christ is preached; and I therein do rejoice, yea, and will rejoice’ (Philippians 1:18).

Slander is not a Christian’s weapon of choice! Truth is. See the bigger picture!