Home → Phaneroo → The Consequence In A Name

The Consequence In A Name

Genesis 41:51(KJV); And Joseph called the name of the firstborn Manasseh: For God, said he, hath made me forget all my toil and all my father’s house. 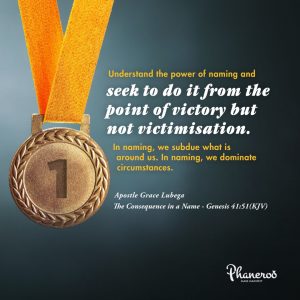 Naming is a liberty of the spirit to any man that has been given power and authority.

People who do not see naming as liberty easily offend in the spirit.

Examine this privilege in the life of Adam. The Bible says of him in Genesis 2:19, “And out of the ground the Lord God formed every [wild] beast and living creature of the field and every bird of the air and brought them to Adam to see what he would call them; and whatever Adam called every living creature, that was its name.”

The ability to correctly name the things that must submit to you is one of the principles of dominion.

However, Joseph, as seen from our theme scripture did not understand this.

In his mind, by naming his firstborn son ‘Mannaseh’, he meant that God had made him forget his toil and all his father’s house. In the realm of the spirit, it marked Manasseh as the forgotten one. This cost Manasseh a certain position in the spirit and gave Ephraim the advantage over him (Genesis 48:13-19).

Understand the power of naming and seek to do it from the point of victory but not victimisation.

Remember that in naming we subdue what is around us. In naming, we dominate circumstances.

Understand the power of naming and seek to do it from the point of victory but not victimisation. In naming, we subdue what is around us. In naming, we dominate circumstances.

PRAYER: Father God, I thank you for this knowledge. What great liberty! I receive its understanding and walk in its manifestation. I look at life through the lens of victory and mark the milestones of my life with the testimony of goodness. In this wisdom, I influence and dominate my world. In Jesus’ name. Amen.