Home → Phaneroo → The Audacity Of The Circumcised

The Audacity Of The Circumcised

1 Samuel 17:25-26(KJV); And the men of Israel said, Have ye seen this man that is come up? Surely to defy Israel is he come up: and it shall be, that the man who killeth him, the king will enrich him with great riches, and will give him his daughter, and make his father’s house free in Israel. And David spake to the men that stood by him, saying, What shall be done to the man that killeth this Philistine, and taketh away the reproach from Israel? for who is this uncircumcised Philistine, that he should defy the armies of the living God? 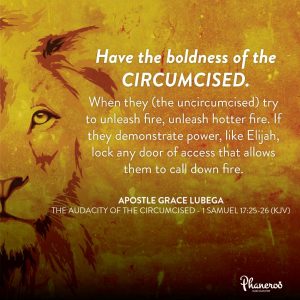 The scriptures give us an account of how Goliath had spent days mocking Israel.

He had continuously and boldly declared, “I defy the armies of Israel this day; give me a man, that we may fight together.”(1 Samuel 17:10).

As a result of his continuous taunts, Saul and the whole of Israel were literally “shaking in their boots”(1 Samuel 17:11).

Here, Goliath is an example of men in this world who have challenged children of the covenant and demanded that they prove themselves.

I have heard men say, “If you are Born Again, I dare you to do this and we will see who has more power.”

Beloved child of God, you are not supposed to be shaken in the face of such men like Israel did. No!

One day, witches and wizards all over the world decided to hold their first international conference in Benin. The chief host boldly said, “Not even God can stop it. We know the power we carry.”

When Archbishop Benson Idahosa heard this, he said, “‘Yes he is correct…That is why I am here, God does not need to waste his time considering matters as trivial as stopping the conference of witches’.

As a result of the Archbishop’s audacity, the conference was cancelled!

Like David, you should be able to boldy say, “Thou comest to me with a sword, and with a spear, and with a shield: but I come to thee in the name of the Lord of hosts, the God of the armies of Israel, whom thou hast defied.”(1 Samuel 17:45).

When they try to unleash fire, unleash hotter fire. If they try to demonstrate power, like Elijah, lock any door of access that allows them to call down fire.

Have the boldness of the CIRCUMCISED. Hallelujah!

Have the boldness of the CIRCUMCISED. When they (the uncircumcised) try to unleash fire, unleash hotter fire. If they try to demonstrate power, like Elijah, lock any door of access that allows them to call down fire.

PRAYER: Father, I thank you for this Word. Thank you because I am a victor, above and not beneath and more than a conqueror through Christ who strengthens me. I am a child of the covenant, a demonstrator of the Spirit and power of God. I walk in this boldness every day. I am not intimidated by those of the false light. In Jesus’ name. Amen.