Home → Phaneroo → Principles of the Birthright: Lessons from Ephraim And Manasseh

Principles of the Birthright: Lessons from Ephraim And Manasseh

Genesis 48:14-20(KJV); And Israel stretched out his right hand, and laid it upon Ephraim’s head, who was the younger, and his left hand upon Manasseh’s head, guiding his hands wittingly; for Manasseh was the firstborn. And when Joseph saw that his father laid his right hand upon the head of Ephraim, it displeased him: and he held up his father’s hand, to remove it from Ephraim’s head unto Manasseh’s head. And Joseph said unto his father, Not so, my father: for this is the firstborn; put thy right hand upon his head. And his father refused, and said, I know it, my son, I know it: he also shall become a people, and he also shall be great: but truly his younger brother shall be greater than he, and his seed shall become a multitude of nations. And he blessed them that day, saying, In thee shall Israel bless, saying, God make thee as Ephraim and as Manasseh: and he set Ephraim before Manasseh. 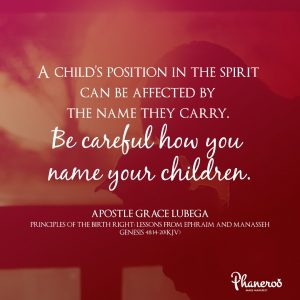 However, our theme scripture reveals that when Jacob was blessing the sons of Joseph, he set Ephraim, the second born before Manasseh despite Joseph’s protests.

Why was this so?

The Lord revealed to me that the reason was in the naming of these two boys.

This teaches us that a child’s position in the spirit can be affected by the name they carry.

Be careful about how you name your children.

As a parent who understands the testimony of the victory of Christ, regardless of the circumstance of the birth of a child, give names that resonate with their identity in God.

GOLDEN NUGGET:
A child’s position in the spirit can be affected by the name they carry. Be careful about how you name your children.

PRAYER: Lord in heaven, I thank you for this wisdom. I understand the spiritual implication of names and determine that my children will have names that reflect an identity in Christ. They are the first and never the last, above and not beneath because of what I have determined by their names. In Jesus’ name. Amen.