Home → Phaneroo → In the Kingdom of Glass

In the Kingdom of Glass

2 Corinthians 3:18 (AMPC), And all of us, as with unveiled face, [because we] continued to behold [in the Word of God] as in a mirror the glory of the Lord, are constantly being transfigured into His very own image in ever increasing splendor and from one degree of glory to another; [for this comes] from the Lord [Who is] the Spirit. 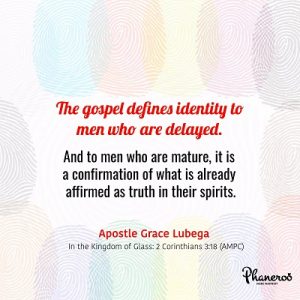 The Word of God is a glass; a mirror. What you see in that mirror is a reflection of who you are.

That kingdom of glass is delayed by men who who are trying to discover themselves.

For example, consider two men in prayer; one is saying, ‘I cannot fail…I do not fail…’ However, this one man is confessing the Word because he speaks out of fear and thinks that the more he says it, the more it will be established as truth.

Another man is saying, ‘I cannot fail….I do not fail…’ but he speaks from the place of one who knows and is certain that he cannot fail because he knows who he is in God.

One man prays to fit himself into what he is saying and another speaks from a confirmed position of what is already affirmed in his spirit.

They are both speaking the same words, sitting under the same message but producing different results.

It is because one is more delayed than the other. The delayed man looks into the glass without the knowledge of who he is.

Beloved saint, the gospel defines identity to men who are delayed. And to men who are mature, it is a confirmation of what is already affirmed as truth in their spirits. Hallelujah!

GOLDEN NUGGET:
The gospel defines identity to men who are delayed. And to men who are mature, it is a confirming of what is already affirmed as truth in their spirits.

PRAYER: Father, thank you for this Word. I know who I am, the Word has defined my identity. Every day as I behold like in a mirror, I grow into the fullness of the stature of my Lord and savior. In Jesus’ name. Amen.