Genesis 3:7 (KJV); And the eyes of them both were opened, and they knew that they were naked; and they sewed fig leaves together, and made themselves aprons. 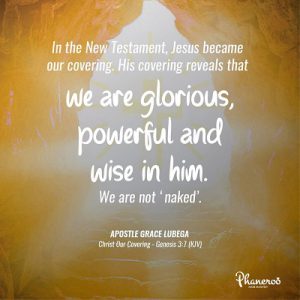 When God clothed Adam and Eve after the fall of man, it was not merely physical nakedness that He sought to cover.

He sought to clothe a spiritual state, and not just the physical lack of clothes.

The devil had opened their eyes to a different kind of nakedness—that they were gods of self.

This state of man required the shedding of blood and He – God had to kill an animal to clothe them (Genesis 3:21).

In the New Testament, Jesus became our covering. The Bible says in Galatians 3:27, “For as many of you as have been baptized into Christ have put on Christ.”

His covering reveals that you are glorious, powerful and wise in him. You are not ‘naked’. Hallelujah!

GOLDEN NUGGET:
In the New Testament, Jesus became our covering. His covering reveals that we are glorious, powerful and wise in him. We are not ‘naked’.

PRAYER: Father, I thank you for your Word. Today, I understand that you are my covering, for as many as are in Christ, we have put on Christ. He is my garment, my adornment, and my beauty. My eyes are closed to every form of weakness and open to the immeasurable treasures in the inside of me. In Jesus’ name. Amen.