1 Corinthians 3:10-11(KJV); ACCORDING TO THE GRACE OF GOD which is given unto me, as a wise master builder, I have laid the foundation, and another buildeth thereon. But let every man take heed how he buildeth thereupon. For other foundation can no man lay than that is laid, which is Jesus Christ. 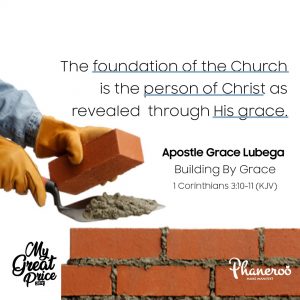 The foundation of the Church is the person of Christ as revealed through His grace.

There is no other way Paul could have built except by grace. If the foundation was laid by the operations of grace, the edifice can only rise by grace.

Paul peered through the pages of history and knew that the strong winds of heresy would attempt to shake and undermine the strength of the rising structure of the body of Christ.

As such, he cautioned them in Hebrews 13:9, “Be not carried about with divers and strange doctrines. For it is a good thing that the HEART BE ESTABLISHED WITH GRACE; not with meats, which have not profited them that have been occupied therein.”

He puts the emphasis on the fact that the ground (being the hearts of men) must be strengthened in GRACE for the building to stand.

To emphasize this critical point, when he came to the end of his race, he said, “And now, brethren, I commend you to God, and to THE WORD OF HIS GRACE, WHICH IS ABLE TO BUILD YOU UP, and to give you an inheritance among all them which are sanctified”(Acts 20:32).

Again, we see the relationship between GRACE and BUILDING.

We cannot build any other way, child of God. God has shown us the way.

We build by grace.

If you must grow a ministry, business, career or any area of your life, embrace His grace for in embracing it, you embrace Him.

The foundation of the Church is the person of Christ as revealed through His grace.

PRAYER: Lord, I thank you for this Word. Thank you for the precious gift of grace. I know that it is more than just a doctrine but your very person. I yield to this truth and embrace it in all that I do. I grow in the consciousness that I know nothing of myself, that I decrease each day while you increase; that you will and do in me according to your purposes. In Jesus’ name. Amen.