Home → Phaneroo → Speaking The Language Of All Men

Speaking The Language Of All Men

Acts 2:7-11(KJV) And they were all amazed and marvelled, saying one to another, Behold, are not all these which speak Galilaeans? And how hear we every man in our own tongue, wherein we were born? Parthians, and Medes,and Elamites, and the dwellers in Mesopotamia, and in Judaea, and Cappadocia, in Pontus, and Asia, Phrygia, and Pamphylia, in Egypt, and in the parts of Libya about Cyrene, and strangers of Rome, Jews and proselytes, Cretes and Arabians, we do hear them speak in our tongues the wonderful works of God. 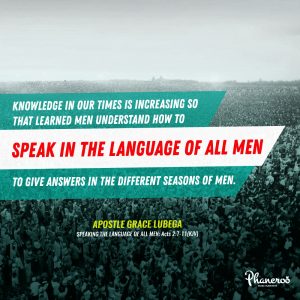 When the Spirit fell upon the disciples and gave them utterance, each man on the outside could hear them speaking in his own language.

This is the language in learned men, they know how to speak a word in season to him that is weary(Isaiah 50:4).Even if millions of people are listening to you, every man picks a word for his or her season because you speak in his language.

This principle applies to any one: a businessperson, a career person or an student. God can give you an idea that any man regardless of their language will relate with.

For this very reason, knowledge in our times is increasing: that learned men may understand how to speak in the language of all men to give answers in the different seasons of men . Hallelujah!

GOLDEN NUGGET: Knowledge in our times is increasing so that learned men understand how to speak in the language of all men to give answers in the different seasons of men.

PRAYER: Father, I thank you for this knowledge. I know how to speak into men’s seasons because I am learned. My ideas, proposals and teachings are understood by all men. By this, I draw many to the kingdom. In Jesus' name. Amen.