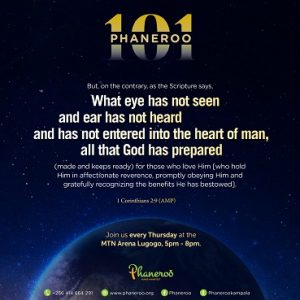 The responsibility of Prayer

Many people ask and receive not because they want to consume it upon their own lusts [James 4:3]. The mind of the Spirit is not invented in their lives enough to receive certain things because even if the things they ask for are good in themselves, the end of them is the lust of their eyes, the lust of their flesh and the pride of life [1 John 2:16].

The State of Your Heart

God has to deal with your heart. Some of you want to be used of God but your heart is not right. A young man once came to me and told me, ‘apostle, I want to build a big ministry, I think you can teach me how’ and the spirit told me, ‘he has no part nor lot in this’.  He was like Simon the sorcerer. Simon was Born Again, he had believed and followed the apostles around but the Bible says that he asked to buy the anointing [Acts 8:18]. If it was in our day, he could have simply gotten the money and put it in the kingdom and people say we thank God that brother Simon bought equipment yet at the end of the day, he did not buy equipment because he wanted to serve God but he still had the same spirit at work in him when he was still the ‘great power of God’ as a sorcerer that always exposed his heart to the praises of men. God told him that he had no part nor lot in that matter for his heart was not right in the sight of God [Acts 8:21].  There is nothing God cannot do in you. Just check the state of your heart because out of it flow the issues of life [Proverbs 4:23].

Many people come in the presence of Christ, very selfishly, very selfishly.  Do you know how many ministers have failed to go ahead in the things of the ministry because every time God looks at the man’s heart he finds that it is not right? Yes the man gives, yes the man sows, he does everything right but he never progresses. Then you think God has purposed for others to be blessed except you. No, go back and examine your heart brother, you might find that you are lusting for the things that ought to be working in you by the love of God.

Many of you, if only the liberties of this access were given to you, if only the law of liberty was revealed to you in its fullness, and the Lord opened your eyes to the back end of the things in eternity, the lusting for the things in eternity would kill you only because you are consumed by the glory of the beauty of those things without understanding the integrity that comes with them.

That is why men walk in the spirit, go into the heavenly places, see the glassy sea and the angels but come back without the message of divine purpose. All they have is an experience of things lusted for. Then before you know it, other men start to lust for these very things, they go to the presence of God and say, ‘God, I want to visit heaven, I want to see things in the spirit.’ But the question is, ‘why? You want to see them such that you do what? It is not that God cannot give them to you, but when he looks at your heart, you just want a place of glory, such that you can stand before multitudes and tell them, ‘I went to heaven on this day’. That is why for many, their testimonies do not carry the multiplication of grace on the lives of their hearers because the experience is done ON you and FOR you but not done IN you. Paul said I would rather not speak save of the things that Christ has wrought IN me to make the gentiles obedient both by words and deed [Romans 15:18]. The grace of God multiplies in the lives of men around you when you stop lusting. If you don’t and these things eventually come to you, one day, you might be too rich to pray, too rich to serve God. Some people are only in ministry because they don’t have jobs yet, because they are not yet married but the day the man comes, they will no longer come to church.

That is the difference between a man who stores riches on the earth and a man who stores up treasures in heaven. Everything that man does has a heavenly implication and results that echo through eternity. That is a man of the kingdom.  Is your heart in the gospel? Where a man’s heart is, his treasure is also. Your treasure is where your heart is and your heart is where your treasure is. We had a group of guys back in campus, when we had just met God and we used to go on prayer mountains for hours and just say, ‘God, use us. Use us. Use us’. Today, people don’t make those prayers or if they ask to be used, it is because they like the camera. They just like the camera.

Jesus says God heard him always. Look at how he lived his life. Every answered prayer of the Christ, was a message. Everything he did, even walking on water. He did not walk on water for them to know that he was a man of God. He walked on water because he wanted to teach what it means for a man to walk by faith and defy the laws of the earth. Every miracle of the Christ had a hidden mystery.

If you are still at the level where you are doing things for men to approve you as a worker then you have lost it. Your primary approval is with God. He says, study the word that you might be approved unto God, a workman that needs not be ashamed [2 Timothy 2:15]. Our approval is by Christ. The word for approved used herein is ‘stephanos’, the Greek name for the apostle Steven. He was simply a cook but he had too much approved in his spirit that if there was necessity, he would do miracles, signs and wonders. He preached until the Christ stood up from his seat [Acts 7:56]. Stephanos, was the approved one of God, yet look at what he was doing, serving tables. That is why he says, let he who thinks that he is the greatest in the kingdom be least [Matthew 23:11]. Live your life as the least. Don’t feel too special to be used of God. We are anointed for service. If you are not getting married to serve, don’t get married, you have no part nor lot, if you are not doing ministry to serve, if you are not getting a job to become a better servant of Almighty God, don’t even waste your time.