The Transition Of Ancient Oil – 2

Gen 49:26 (AMP); The blessings of your father [on you] are greater than the blessings of my forefathers [Abraham and Isaac on me] and are as lasting as the bounties of the eternal hills; they shall be on the head of Joseph, and on the crown of the head of him who was the consecrated one and the one separated from his brethren and [the one who] is prince among them. 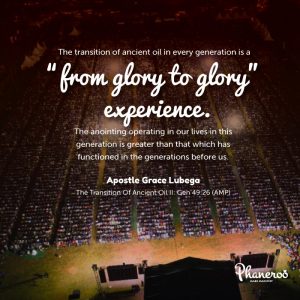 In our theme scripture, the Spirit of God reveals to us a fundamental tenet of the “transition of ancient oil”; this is the fact that in every subsequent generation, the anointing increases.

And so it is up to this day. The transition of ancient oil in every generation is a “from glory to glory” experience.

The anointing operating in our lives in this generation is greater than that which functioned in the generations before us.

Indeed, we have heard of the fathers of the faith like Smith Wigglesworth who raised tens from the dead; God expects our generation to do more because the supply of the anointing is greater.

Men like Alexander Dowie demonstrated the healing power of God so mightily that doctors in Zion Illinois were put out of work; God expects our generation to do more!

We come from a long line of God-men that defied the forces of nature, revived continents by the power of God and turned the world upside down.

History has written their stories for this one cause; that we do more because these men and women were only the example but never the standard.

The transition of ancient oil demands that we do what no eye has seen, ear has heard nor has entered into the hearts of men. Hallelujah!

The transition of ancient oil in every generation is a “from glory to glory” experience. The anointing operating in our lives in this generation is greater than that which has functioned in the generations before us.