1 Samuel 18:8(KJV); And Saul was very wroth, and the saying displeased him; and he said, They have ascribed unto David ten thousands, and to me they have ascribed but thousands: and what can he have more but the kingdom? 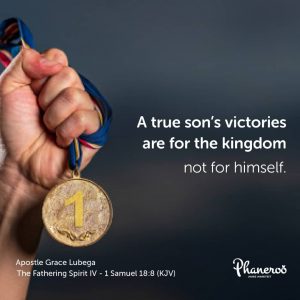 Illegitimacy in the realm of the spirit is shameful.

Because of this, many fatherless children have been driven into the hands of men who looked like fathers yet in fact they are not fathers.

The result is that many Davids have been raised by Sauls.

Saul gave the impression that he loved David as a son but the actual fact was that to Saul, David was in fact not a son but a weapon; by pretending to call him a son only made him a better weapon.

As such, they find themselves used more by the men and women to whom they submit than the God who called them.

Now, understand that a child can be a weapon.

In Psalms 127:4-5, the Bible says, ‘As arrows are in the hand of a mighty man; so are children of the youth. Happy is the man that hath his quiver full of them: they shall not be ashamed, but they shall speak with the enemies in the gate.’

It is okay for a spiritual father to trust a son with responsibilities; to place on his shoulders the burdens of ministry; to have him at the frontline when the enemies attack. But where do we draw the line between true sons in service to fathers and sons merely being used as weapons?

A true son’s victories are for the kingdom and not for himself. When David slew thousands of Philistines, it was not for himself, but it was for the sake of Israel.

Saul failed to see this and as such asked, ‘what can he have more but the kingdom?’

Never let your insecurities colour the bigger picture. When David wins, the kingdom wins.
When the son wins, the ministry wins.

GOLDEN NUGGET:
A true son’s victories are for the kingdom and not for himself.

PRAYER: Father, I thank you for this Word. Thank you for the wisdom to submit to spiritual authority in humility and in understanding. I serve with diligence and discernment. I am not only a gift, I am a son. I benefit the ministry and I benefit the kingdom of God, to the glory of your name, Amen.