Genesis‬ 37:9-11 (KJV)‬; And he dreamed yet another dream, and told it his brethren, and said, Behold, I have dreamed a dream more; and, behold, the sun and the moon and the eleven stars made obeisance to me. And he told it to his father, and to his brethren: and his father rebuked him, and said unto him, What is this dream that thou hast dreamed? Shall I and thy mother and thy brethren indeed come to bow down ourselves to thee to the earth? And his brethren envied him; but his father observed the saying. 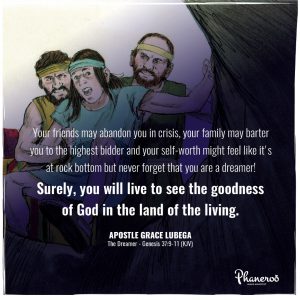 Joseph was what some may call an ordinary child. He was neither the first born nor the mightiest of all the children of Israel.

However, one day, something happened that changed the course of his destiny and the entire direction of his life.

JOSEPH HAD A DREAM!

His dreams earned him the hatred of his brothers and the change in his father’s countenance toward him.

Understand that Joseph did not pray for such a dream or its implications.

He did not spend days seeking God for a time when his family would bow to him. This blessing found him. Praise God!

The sequence of events that followed was not because Joseph had “a spirit of rejection” but because he was a dreamer.

His own brothers staged his early “death” and he was sold into slavery. He was then taken to prison for years, all because he was a dreamer.

You may identify with Joseph’s story.

It might be that people have rejected you; your own family looks at you as though you are the scum of the earth. But do not despair!

Some of these tests follow a dreamer.
Hold onto the things God has revealed to you and the convictions that He has placed in your spirit.

Keep your eyes on the prize and not the afflictions that seem to deter you from the vision God has set before you.

Your friends may abandon you in crisis, your family may barter you to the highest bidder, and yourself-worth might feel like it’s at rock bottom but never forget that you are a dreamer!

Surely, you will live to see the goodness of God in the land of the living (Psalms 27:13). Hallelujah!

Your friends may abandon you in crisis, your family may barter you to the highest bidder and your self-worth might feel like it’s at rock bottom but never forget that you are a dreamer! Surely, you will live to see the goodness of God in the land of the living.

PRAYER: Father in the name of Jesus, I thank you for this word. I thank you because you set me up. I can never be rejected. The dream you have set before me can never die. It does not matter what I face. My eyes are set on you and not on my circumstances. I know you have a good plan for my life, to prosper me and not to harm me. All things are working for my good. In Jesus’s name, Amen.