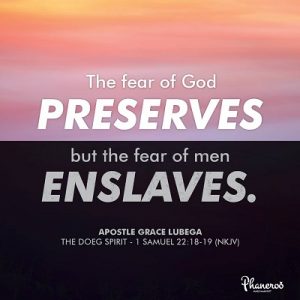 Interestingly, the Hebrew name “Doeg” is translated to mean “fearing”.

This man was the typical representation of how far the spirit of fear can go. This is the fear of men and not the fear of God.

When King Saul first commanded his men to murder the priests of the Most High God (1Samuel 22:17), his servants disobeyed the king’s order for they could not dare to lay their hands on the Lord’s anointed.

However, only Doeg dared to do it. He single-handedly killed eighty five priests because of the fear of a man.

Outwardly, what he did might have appeared as a brave act but Doeg did that which no man dared.

Fear can cause a man to tread in places even angels cannot tread.

In fact, the scriptures warn us about how the fear of men ensnares (Proverbs 29:25).

The fear of God PRESERVES but the fear of men enslaves.

You have not received the spirit of bondage again to fear (Romans 8:15). Make the choice never to be afraid of what a man can do to you because your fear is of God and not of men.

Fill your spirit with the Word of God which is the Sword of the Spirit that cuts out the spirit of fear! Learn to meditate on how much God loves you because His perfect love casts out fear (1 John 4:18).

The fear of God PRESERVES but the fear of men enslaves.

PRAYER: Loving Father, I thank you because you have not given me a spirit of fear, but of love, power and a sound mind. I refuse to be anxious for anything! I am not afraid of any man! My fear and reverence is of you God! I am bold in all that I say and do because I know the God before whom I stand. In Jesus name. Amen.