Proverbs 16:32 (KJV) He that is slow to anger is better than the mighty; and he that ruleth his spirit than he that taketh a city. 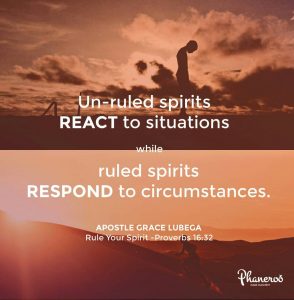 There are people who have learnt to rule their bodies. They have tamed the flesh by testing and surpassing its limits. But not many know how to rule their spirits.

Our theme scripture reveals that when you rule your spirit, you are better than one who takes a city. There are territories in the spirit that can only be claimed by men who know how to rule their spirits.

Ruling your spirit is when the truth revealed to you commands how you think and speak. Un-ruled spirits REACT to situations while ruled spirits RESPOND to circumstances with the Word.

Never accept negative reports! Never resign yourself to failure. That is a ruled spirit. Praise God!

PRAYER: Father, I thank you because I have a ruled spirit that is established in truth. I continuously behold the testimony of what you have said in the Word and it defines my responses to all circumstances. You have said that you will never suffer the righteous to be moved. I stand on the conviction that you are my rock and firm foundation. Regardless of how strong the winds of adversity may blow, my spirit is ruled. In Jesus’ name. Amen.