1 Corinthians 1:18 (KJV): For the preaching of the cross is to them that perish foolishness; but unto us which are saved it is the power of God. 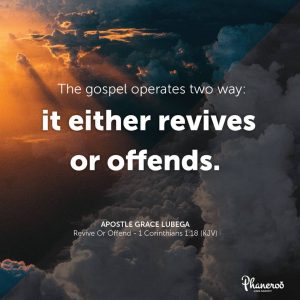 The gospel operates two way: it either revives or offends.

The scripture says that it is foolishness to those that are perishing but is the power of God to us that are saved.

Some people are so concerned with saying the “right things” and in doing so, they compromise the message of the gospel.

They fear to offend certain groups of people in the name of being “sensitive.”

Some have gone so far as to never mention God in their own version of the gospel because we must be religiously “tolerant.”

This compromise in itself amounts to being unequally yoked.

If you are neither reviving nor offending by the message you preach then you are most probably being political.

We lift up Jesus at all times and in all things because He is the answer. Praise Him!

GOLDEN NUGGET:
The gospel operates two way: it either revives or offends.

PRAYER: My God I thank you for the gospel! It is both the power and the wisdom of Jesus Christ; it’s the hope for the world and the answer to the cry of the nations.
God I preach it without disguise and compromise, and behold the doctrine of Christ with a clear conscience.
In Jesus’ name. Amen.