Home → Phaneroo → Lessons In Virtue: Saul To David Vs Jesse To David

Lessons In Virtue: Saul To David Vs Jesse To David

1 Samuel 17:34-36(KJV); And David said unto Saul, Thy servant kept his father’s sheep, and there came a lion, and a bear, and took a lamb out of the flock: And I went out after him, and smote him, and delivered it out of his mouth: and when he arose against me, I caught him by his beard, and smote him, and slew him. Thy servant slew both the lion and the bear: and this uncircumcised Philistine shall be as one of them, seeing he hath defied the armies of the living God. 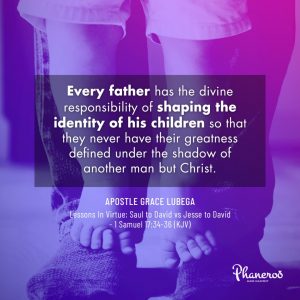 The first time we hear of David’s gallantry and prowess was when he narrates to Saul his admirable experiences with bears and lions while tending his father’s sheep.

Nowhere in the scriptures was it mentioned that David had shared these same stories with his father Jesse.

He killed lions and bears to protect his father’s sheep and yet he did not say a single word about it.

Of course, there was a problem. I would like to imagine that a son would be exhilarated to tell his father how he caught a lion or bear by the beard and slew it.

Glimpses of the problem can be picked from how Jesse did not find David worthy to be anointed king by Samuel.

He paraded all his sons and forgot about David until Samuel asked him if he had any other sons (1 Samuel 16:10-11).

Jesse’s fundamental error was in his inability to identify the greatness in his child; to recognize the mantle in his household.

This is a recurrent problem even in our society today with far-reaching effects, child of God.

Children whose greatness is not called out by their fathers will be preyed upon by other men who seek to unscrupulously fill the void that their fathers failed to fill.

Every father has the divine responsibility of shaping the identity of his children so that they never have their greatness defined under the shadow of another man but Christ.

May you rise to this great mandate!

Every father has the divine responsibility of shaping the identity of his children so that they never have their greatness defined under the shadow of another man but Christ.

PRAYER: Loving Father, thank you for this Word. I know that children are every parent’s opportunity to change the world. What a privilege! I choose to be exemplary, not just to my own but to those whom you have given me authority over. That they will rise to greatness because the Christ I show them every day is He on whose shoulders they stand. In Jesus’ name. Amen.