Home → Phaneroo → The Man From Above

The Man From Above 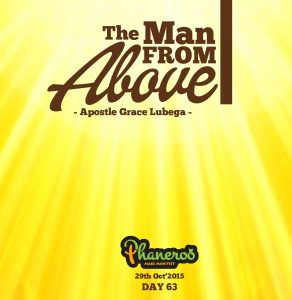 I think that one of the most misunderstood concepts in this life is salvation. It is not healing or anything else but rather, salvation.  People know all about healing and many other things but the reason why they cannot connect them together and get results is because they missed out on the ultimate thing called salvation.  If you understand the concept of salvation, your life cannot stay the same.

What it means to be Born Again

But to as many as did receive and welcome Him, He gave the right [the authority, the privilege] to become children of God, that is, to those who believe in (adhere to, trust in, and rely on) His name— who were born, not of blood [natural conception], nor of the will of the flesh [physical impulse], nor of the will of man [that of a natural father], but of God [that is, a divine and supernatural birth—they are born of God—spiritually transformed, renewed, sanctified].

It goes on to say;

And the Word (Christ) became flesh, and lived among us; and we [actually] saw His glory, glory as belongs to the [One and] only begotten Son of the Father, [the Son who is truly unique, the only One of His kind, who is] full of grace and truth (absolutely free of deception).

Young’s Literal Translation says; and the Word became flesh, and did tabernacle among us, and we beheld his glory, glory as of an only begotten of a father, full of grace and truth.

When the bible says that he became flesh, and did tabernacle among us, fixed his tent of flesh on earth, it means that he got a body and entered it. However, his coming out of a woman was not the beginning of his story. The beginning of Jesus’ story was not when he entered Mary’s womb. His beginning was more eternal. The decision to enter the body was the day she was impregnated but it did not mean that he did not pre-exist. He was the rock from which they drunk [1 Corinthians 10:4]. He pre-existed. In the beginning, he was the light that shone in darkness and darkness comprehended him not. Even though he became flesh, he pre-existed.

Some people think that when you get Born Again, you change and become a better person. You stop cheating and lying and so they say that this man is Born Again. If you understand the Bible you will realize that those are works.

Let me explain something that religious people have failed to understand. I have learnt that some people are not truly Born Again.

The Man from Above

John 3:3 says; Jesus answered and said unto him, verily, verily, I say unto thee, Except a man be born again, he cannot see the kingdom of God.

The Greek word for kingdom is realm. The amplified rendering is; Jesus answered him, “I assure you and most solemnly say to you, unless a person is born again [reborn from above—spiritually transformed, renewed, sanctified], he cannot[ever] see and experience the kingdom of God.”

In Genesis 1:26-27 he says; And God said, Let us make man in our image, after our likeness: and let them have dominion over the fish of the sea, and over the fowl of the air, and over the cattle, and over all the earth, and over every creeping thing that creepeth upon the earth. So God created man in his own image, in the image of God created he him; male and female created he them.

However, this individual that was created did not come. In Genesis 2:7, it says, And the Lord God formed man of the dust of the ground, and breathed into his nostrils the breath of life; and man became a living soul.

God is not a soul. He is a spirit. The bible says that he created them in his image and likeness. That means that they were spirit but they were held in heaven, waiting. The first man who is Jesus said, let me give you a sample and he came into the body, healed the sick, cast out devils, did all these kinds of things and said, ‘it is for your good that I go. Why? Because I have just shown you a sample.’

But many claim, ‘Jesus, we are comfortable with doing what you did’ and he says, ‘no, you do not get it. These things that I have done, you shall do more because I go to the father.’ The superstar returned above and the moment he reached heaven, he said ‘Apostle Grace, go down on earth and show them.’ I came the day I got Born Again. The moment I entered the tabernacle, the angels told me, ‘welcome to the world of men.’ I am not ordinary. I am from above.

Have you ever heard of microscopes, hospitals, the lame or influenza in heaven? That nonsense is not there.

There is a reason why Jesus never fell sick. He could be crucified and suffer all that pain but there is a reason he did not fall sick. When it came to sickness, he told God ‘papa am not that humble.’ It is humility. The bible says that he humbled himself and took on the form of a man. It is humility to be human. That is why he asked Nicodemus, why do you marvel when I say that I am from above?  The day you start to be normal and desire to live a predictable life in salvation, trust me that day, you will die. Spiritual death is a place where a man wants to be normal.

You are Christ on Earth

Galatians 3:16 says; Now to Abraham and his seed were the promises made. He saith not, And to seeds, as of many; but as of one, And to thy seed, which is Christ.

Galatians 3:29 further says; And if ye be Christ’s, then are ye Abraham’s seed, and heirs according to the promise.

The Message Bible says in Galatians 3:16 that now, the promises were made to Abraham and to his descendant. You will observe that Scripture, in the careful language of a legal document, does not say “to descendants,” referring to everybody in general, but “to your descendant” (the noun, note, is singular), referring to Christ.

The 29th verse says also, since you are Christ’s family, then you are Abraham’s famous “descendant,” heirs according to the covenant promises.

I told people that Moses preached the law enough and he became the law. 2 Corinthians 3:15 says that every time Moses is read. It does not say every time the law is read.

The devil entered the serpent enough until revelation referred to him as that serpent. He was not originally the serpent but he entered, ‘tabernacled’ in the serpent and revelation calls him that serpent. In fact, when you dream about a snake, you know that that is the devil, you do not say that that is an angel. If a snake can become the devil and the law can become Moses, how about you child of God? Didn’t you become Christ?

You are from above. When you ‘taberbacled’ into this earthly body, something about you changed. That is why we move in another realm, why I can know things before they happen. I am from above. I live in a realm that is much faster than the devil. The Bible says that the spirit quickeneth but the flesh profiteth nothing. The spirit is willing but the flesh is weak.