Home → Phaneroo → Sowing To The Spirit

Sowing To The Spirit 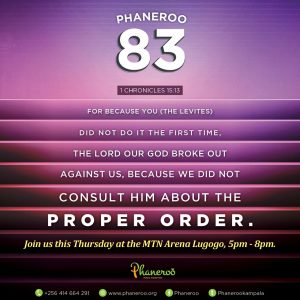 The Bible is Just a Sample

And there are also many other things which Jesus did, which if they were recorded one by one, I suppose that even the world itself could not contain the books that would be written [John 21:25].

There are many things that were done by the Christ but they were not recorded. If the bible says that there are many things that Jesus did and that if we have to write them down, the scriptures tell us that the earth cannot contain the books that could be written, it means that the Bible is only a sample of who Jesus is. The Bible is too small to tell us about all that Jesus is.

John who is writing knows those things that were not written. Don’t think he is imaginatively supposing. He could have said ‘there could be’ but he says there are many things Jesus did. Now when John is writing, he has to pick a few of these things. Jesus is bigger than even the Bible.  He is bigger than what we read in the word; these are just a few pages about the man.

Of the Dimensions of Christ’s Teaching

The reason why we do not see God is because we do not understand the dimension by which he teaches men. God is not subject to the way we think he ought to teach or we think men ought to learn and sometimes I have seen that delusion around the camp. That is why Paul says, ‘let us go without the camp and bear the reproach of Christ.’ There is a camp which thinks that Jesus has to be predictable and fit in their box the way they think he should. If he does not do it a certain way then it is not God. That is why when the disciples meet a man casting out demons, they forbid him because he did not follow with them.

Now here is the challenge. I thought a disciple was going to ask Jesus Christ, ‘How did this one learn? We were with you. You spoke to 5000 people, you fed us and we walked with you. When we were alone, you expounded the parables, and you healed the sick while we were there. We watched you opening blind eyes, raising the dead and healing the sick. We saw you with our very own eyes. How did you teach a man who was not with us? How did you reveal yourself to a man who was not with us?’

The Bible says that, By faith Moses, when he was come to years, refused to be called the son of Pharaoh’s daughter; Choosing rather to suffer affliction with the people of God, than to enjoy the pleasures of sin for a season; Esteeming the reproach of Christ greater riches than the treasures in Egypt: for he had respect unto the recompence of the reward.   It means that Jesus appeared to Moses, but not in the fashion and way men think he ought to appear. So Moses refused to be called the son of the daughter of pharaoh because when he saw Christ, he started to respect the recompense of the reward. He started to have a certain honour of the reward that should come with that and the Bible says that he counted the house of Pharoah lower.

Let me tell you; men don’t just leave comfort zones. If a man has seen Jesus, he will let go of anything that he holds dear; he will let go of those things that you think are important. If you see men who are not ready to lay down their lives, they have not seen Christ. I see Christians who are still being pleaded with to pray and preach; they have not really seen Jesus. The day you see Jesus, everything grows strangely deem; everything starts to loose sense and meaning.

Look at Cornelius. The Bible says that he was a devout man. He was not a Jew. He was an Italian but the Bible says that the angel of the Lord appeared to him. I always tell people that there is always a place for men who are hungry; it is there.

Now, when we look at the man who is casting out devils, he was not shown “the five steps of rebuking devils”  or “Seven ways to know that spirits have left” or “Thirteen ways to identify which demon is tormenting an individual” or “two ways to know whether you can rebuke or not” or “three easy steps to demon chasing. He did not have those books but God taught him.

That is why you ought to take heed of men who are taught outside the camp. When Jesus Christ revealed himself to Paul, he said that no man taught him this gospel. He was in Damascus preaching “Jesus is Lord”. But when Jesus wanted to take him to a certain depth, he separated him unto an experience in Arabia. When he was in Arabia, he was not in Bible school. I am not saying that there is no place for Bible school in a man’s life but I have seen men who have come from bible school and they still don’t know Jesus because there is something deeper about God and the way he wants to teach you that is deeper than any camp. Because of the fulfillment of prophesy that in the last days knowledge shall increase and fill the earth, I have come to the understanding that God is going to start and has started teaching men in ways we can never understand. The one thing I know is that men shall start speaking and other men will ask themselves; where did this one go to school? People will start asking you; ‘how did you get it? Where did you dig it from?’ And honestly, you won’t be able to explain it because the way God teaches is too diverse to be limited to the way we think he should teach.