Home → Phaneroo → His Depths and Heights

His Depths and Heights

John 8:31-36; Then said Jesus to those Jews which believed on him, If ye continue in my word, then are ye my disciples indeed; And ye shall know the truth, and the truth shall make you free. They answered him, We be Abraham’s seed, and were never in bondage to any man: how sayest thou, Ye shall be made free? Jesus answered them, Verily, verily, I say unto you, Whosoever committeth sin is the servant of sin. And the servant abideth not in the house for ever: but the Son abideth ever. If the Son therefore shall make you free, ye shall be free indeed. 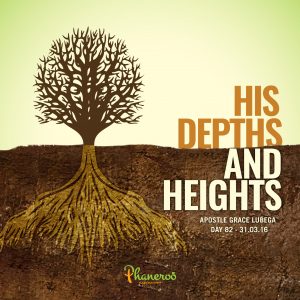 When the bible says that if you continually stay and are present to God, that you become disciples and then you know the truth, the pattern of knowledge is that we stay present before God to know truth. That is why he says and ye shall know the truth and when that truth comes then you are set free.

The Lord has been speaking to me about how Christians understand truth and perhaps why we have been having a big issue in the body of Christ regarding what men define as truth. If the Bible has said that the place of truth is to make a man free, then the life of Christianity is supposed to be a life of freedom because we know truth. That is why when Paul is speaking to Titus, he speaks of a place of how he is a bond servant, called to the elect of God who speaks the truth that must tend to godliness. The true translation is; a truth which leads to godliness; which fosters godliness; which manifests godliness. In other words, the degree of truth you know is the degree to which you manifest God.  If I don’t know truth, I cannot manifest God.

Of things that Must Be Shaken

There was something coming out of him and the heavens could not close; that is what is about to happen. Men are going to speak stuff and heaven will get our attention. It has never been written in the history of the world that the son of man ever left his seat. After he defeated his enemies, he sat down at the right hand of God. However, when one man, Stephen spoke a deep mystery, God said yes! This is it! We are moving into a time where men will minister and God will stand up. There was a time when Amens were only on the earth but the glory we are moving in is going to change things.

The things that entered our spirits could not convert us because they could not align us to the fourth dimension of time. This is why men cannot understand why certain things happen much quicker for some people and they do not happen for others. It is an issue of quantum physics; there are short cuts in higher dimensions. The world is not flat but curved because every time the heights come in, spaces fold in the higher dimension. He says, one day in the house of the lord is like a thousand in the world. That means that if you spent twenty four hours in the presence of almighty God, you can redeem 2.7 years, that is 1000 days. If you spent another two days, that is 2.7 times two; if you spent another three days, that is 2.7 times three. That means that a man can spend three days in the presence of God and redeem eight years. It is why some men can struggle with anything and one day they see God and that is it. It is only one experience you need in the presence of almighty God that can change your life forever.

Take Jesus for example. He went to the wilderness and he fasted and the bible says that he came back in the power of the Holy Ghost. That was the beginning of the second dimension of his function. Before that, he could not perform any miracle even if he was the son of God; not until he separated himself. That is why you must learn to abide. Hosea 10:12 says you must break your fallow ground. It is time to seek the Lord until he rains down righteousness. We need to see a certain manifestation of God. Those days of praying for two minutes are over. Have you spent twenty four hours praying? If you spend fifteen minutes praying and six hours on TV, you have a big problem. If you speak with your boyfriend up to 3am in the morning and never have time in the presence, you have a big problem. No man can pray in spirit and in truth for twenty four hours and his life remains the same. Shortcuts come when we are in the presence. Strength will come when we wait upon the lord and that strengthening is the quickening of the spirit. The days of not praying have come to an end. We have to wake up and seek God! We have to stop sleeping! We have to break these grounds until God just rains his spirit on us.