At that time Jesus went on the sabbath day through the corn; and his disciples were an hungred, and began to pluck the ears of corn and to eat. But when the Pharisees saw it, they said unto him, Behold, thy disciples do that which is not lawful to do upon the sabbath day. But he said unto them, Have ye not read what David did, when he was an hungred, and they that were with him; How he entered into the house of God, and did eat the shewbread, which was not lawful for him to eat, neither for them which were with him, but only for the priests? Or have ye not read in the law, how that on the sabbath days the priests in the temple profane the sabbath, and are blameless? But I say unto you, That in this place is one greater than the temple.  But if ye had known what this meaneth, I will have mercy, and not sacrifice, ye would not have condemned the guiltless. 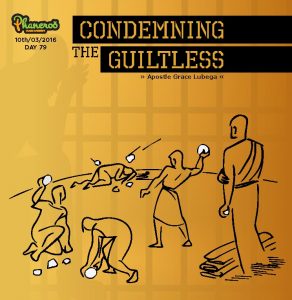 Judge Not the Guiltless

I realized that sometimes, the spirit of religion seeks to blame the guiltless. It is easy by religion to condemn the guiltless. The disciples of Jesus went through these corn fields on the Sabbath and started to eat corn. The Pharisees judged them and Jesus asked them, ‘have you not read?’

The truth of the matter is that they had not read. They were doctors and teachers of the law. They appeared to be reading the word but they were not actually reading it.

They did not ask themselves, ‘what makes a priest break the law and remain blameless?’ What makes a priest blameless? It means that God’s dealing with this priest is not based on what he does or what he breaks and build. Rather, he relates with him on another platform.

Why were priests blameless when they were breaking Sabbath rules all the time? What was it about the priest that imputed righteousness on him even when he was wrong? Was it meant to just encourage the priest to do what he wanted to do or it had something to do with how God wanted to deal with certain people?

For example, many of us have read this scripture about how from the days of John the Baptist, the kingdom suffers violence [Matthew 11:12].

When John the Baptist came, his language was, ‘repent ye, for the kingdom of God is nigh.’ He was saying, ‘change your mindset because the realm of the spirit is nigh’. In other words there was a necessity for a man’s mind to change because what was coming was not to find men in their carnal minds. That is the beginning of violence because when men read the law and the prophets and relate with what is in there, because they do not even understand what the law and the prophets say, when the life of the kingdom comes and the realm of God starts to manifest, many of them get contradicted and they start to wage violence.

That violence is not from the outsiders but from within. When John the Baptist was killed, the next thing Jesus did was that he carried on the message; ‘repent for the kingdom of heaven is at hand.’ When he did this, his biggest persecutors, the ones who showed him the most violence were the Pharisees and Sadducees, religious people. The biggest source of violence in the kingdom of God is from men who have read the bible and not from men who have not read it.

Dead to the Law, No longer in the Flesh

Romans 7:4-5 says; Wherefore, my brethren, ye also are become dead to the law by the body of Christ; that ye should be married to another, even to him who is raised from the dead, that we should bring forth fruit unto God. For when we were in the flesh, the motions of sins, which were by the law, did work in our members to bring forth fruit unto death.