John 21:9-13; As soon then as they were come to land, they saw a fire of coals there, and fish laid thereon, and bread. Jesus saith unto them, Bring of the fish which ye have now caught. Simon Peter went up, and drew the net to land full of great fishes, an hundred and fifty and three: and for all there were so many, yet was not the net broken. Jesus saith unto them, Come and dine. And none of the disciples durst ask him, Who art thou? knowing that it was the Lord.  Jesus then cometh, and taketh bread, and giveth them, and fish likewise. 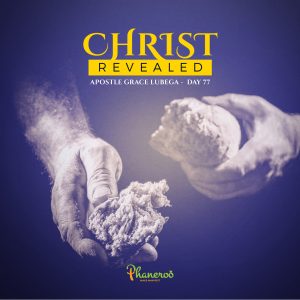 Of the Christ Revealed

For three years, the disciples saw Jesus perform miracles; they saw him heal the sick; they protected him from the multitudes; when he was with them, he expounded on the scriptures yet he spoke in parables to the multitudes. He did all these things while they watched; they even started to cast out devils in his name. However, when he died and resurrected three days later, they could not identify him.

Let us look at another account in Luke 24. The Bible speaks of the disciples on the road to Emmaus.

And they drew nigh unto the village, whither they went: and he made as though he would have gone further. But they constrained him, saying, Abide with us: for it is toward evening, and the day is far spent. And he went in to tarry with them. And it came to pass, as he sat at meat with them, he took bread, and blessed it, and brake, and gave to them. And their eyes were opened, and they knew him; and he vanished out of their sight.

When it was eido, the experience of just understanding that it was him, he did not vanish, he ate bread and meat with them but when he got to a point where he breaks bread and epignosis comes to their spirits, the Bible says he vanished. It means that you do not need to see him in the flesh any more if you carry epignosis.

Why could they walk with Jesus and not understand that it was him three days later when he resurrected? The Lord told me this; that the resurrected Christ can only be revealed. He cannot be taught, preached or prophesied without revelation.

Paul says in Galatians 1:11-12; But I certify you, brethren, that the gospel which was preached of me is not after man. For I neither received it of man, neither was I taught it, but by the revelation of Jesus Christ.

When Jesus is revealed, that is it. The only challenge is that we train men when they get Born Again in discipleship class to ministry class, they are committed as ministers, then we commission them without the revelation of Jesus Christ but with only the theological understanding of Christ so Christ becomes a job like any other profession in the university and not a person with whom they can relate.

Who is Jesus?  In these scriptures, we see an example of men who having been with him for three years and more could not identify him just after three days. That is why when he is praying for the church, Paul says, I never cease to pray for you that the God of our Lord Jesus Christ, the Father of glory, may give unto you the spirit of wisdom and revelation in the knowledge of him. Why? Because he ought to be revealed. If he is not revealed, he is not personal yet.