Home → Phaneroo → What Do You See

What Do You See 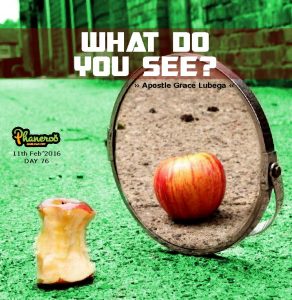 [Genesis 30:31-43]; And he said, What shall I give thee? And Jacob said, Thou shalt not give me any thing: if thou wilt do this thing for me, I will again feed and keep thy flock. I will pass through all thy flock to day, removing from thence all the speckled and spotted cattle, and all the brown cattle among the sheep, and the spotted and speckled among the goats: and of such shall be my hire. So shall my righteousness answer for me in time to come, when it shall come for my hire before thy face: every one that is not speckled and spotted among the goats, and brown among the sheep, that shall be counted stolen with me. And Laban said, Behold, I would it might be according to thy word. And he removed that day the he goats that were ringstraked and spotted, and all the she goats that were speckled and spotted, and every one that had some white in it, and all the brown among the sheep, and gave them into the hand of his sons. And he set three days' journey betwixt himself and Jacob: and Jacob fed the rest of Laban's flocks. And Jacob took him rods of green poplar, and of the hazel and chesnut tree; and pilled white strakes in them, and made the white appear which was in the rods. And he set the rods which he had pilled before the flocks in the gutters in the watering troughs when the flocks came to drink, that they should conceive when they came to drink. And the flocks conceived before the rods, and brought forth cattle ringstraked, speckled, and spotted. And Jacob did separate the lambs, and set the faces of the flocks toward the ringstraked, and all the brown in the flock of Laban; and he put his own flocks by themselves, and put them not unto Laban's cattle. And it came to pass, whensoever the stronger cattle did conceive, that Jacob laid the rods before the eyes of the cattle in the gutters, that they might conceive among the rods. But when the cattle were feeble, he put them not in: so the feebler were Laban's, and the stronger Jacob's.  And the man increased exceedingly, and had much cattle, and maidservants, and menservants, and camels, and asses.

What Do You See?

He got an idea and decided to peel rods and then spot or stripe them. He knew that the issue, was once the animal got to drink and mate, all you needed was to make it see something. When it did, it would produce exactly what it had seen.

The KJV version of Luke 1:37 says; for with God nothing shall be impossible. The Message version renders it this way; nothing, you see, is impossible with God.

There are two kinds of illumination. The first is when light is cast on the things hidden because the spirit world is hidden. That is why for any man who sees in the spirit, you will realize that when your eyes are opening, it is as though you are trying to light up something in darkness. It is not demonic ungodly darkness but rather, God conceals these things by a certain darkness. It is not ungodly but it is for men who carry light. That is the essence of preaching salvation to us. The Bible says that if our gospel be hid, it is hid to them that are lost: In whom the god of this world hath blinded the minds of them which believe not, lest the light of the glorious gospel of Christ, who is the image of God, should shine unto them. The moment the gospel comes to you and you believe, your eyes open.

The scriptures say that you have been given everything that pertains to life and godliness through the knowledge of him who called us to his own glory and excellence. Everything you need in God is already provided for. You just need illumination.

God is Bound to Do What You See

God works by the principle of what you see. This is why if you get the story of Jacob and put it in the context of the mind of God and how He relates with us, you realize that He calls us sheep. We are His sheep and He is the shepherd. This also takes us to the primary responsibility of the shepherds- the pastors and ministers of the gospel. Our responsibility is simple- to make men see because whatever they see in conception by the waters, they will produce. It means that we need the waters, that is the Holy Spirit, and we need the power to conceive.  When he power to conceive is available and the waters are also there, just show the man- he will produce exactly what he sees.

If sheep can look at speckled and spotted rods and what they see enters their DNA and they reproduce something spotted or speckled because they looked on these rods, how much more can you reproduce when you start to see in God? That is why Luke says, nothing you see is impossible with God. That means that God is bound to do what you see. The availability of his power is distributed according to how much you are seeing.  You cannot see yourself fail and say ‘I am a success, I am a success, I am a success.’ Christians have a problem-many have a bad sight and speak positive statements to change their eyesight. That is not the life of a Christian. The Bible says that this is the spirit of faith, for as we have believed, so have we spoken. We do not speak things to come to pass. We speak things because they are. That is the mind of God. He is the God who speaks the things that are not as though they are and not as they will become.