Home → Phaneroo → The Increase Of Knowledge

The Increase Of Knowledge 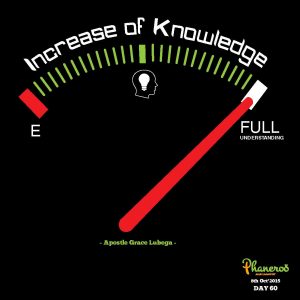 [Daniel 12:4] There are prophesies that have been spoken regarding the church. For example, wars and rumours of war to signify the end times, prophesies of pestilences and disease, of iniquity abounding, of the Son of Perditon exposed and of the love of many waxing cold because iniquity abounds. There are many things spoken of as regards the last days but one thing that catches my spirit is the fact that he said that in the last days, knowledge shall increase.

Thus, regardless of all the prophesies made about the church, the fact that knowledge shall increase is one thing that the church has to embrace. With all this increase of knowledge also comes the ultimate issue. He says that we should not desire to be teachers because with that comes a weightier judgment. To whom much is given, much is required.

The lord has been speaking to me of the weight of responsibility that the church is to have by reason of the knowledge that is being distributed to us in these last days. Sometimes, it has brought me to tears because we are still too far. We have made lame men walk, raised the dead and done great things. We have prophesied but all these have been done before.  All the gifts  that we carry have happened before.

Sometimes, stagnation is not when somebody is not moving ahead. Rather, it is when someone keeps doing the same thing that existed before. Every revival has healing and the five fold ministry and that is wonderful, but what is making the church stagnant is when you look at something done in the church today and realise that it existed in 1932, that it happpened previously under a certain man's hand. That is stagnation.

The bible says that eye has not see, ear has not heard, it has not entered the hearts of man what the Lord has prepared for us but God has revealed them unto us because the spirit searches the deep things of God [ 1 Corinthians 2:9-10].

Paul is clear in the book of Titus. If it is truth, it ought to tend to a certain level of godliness[Titus 1:1]. As knowledge increases,  there has to  be a  manifestation that is working with us because we know. But how can we deem to know what does not carry results? What is knowledge if it does not carry results? Revelation is redemptive power. If God has to reveal certain things, it means that he gives us a particular glory and power to move in a  certain dimension. That is why its not registered that christ healed by a shadow even if he could have but rather by the hem of his garment. He knows that there is a  glory to glory principle by which Peter will heal by a shadow, Paul will heal by a hankie and you and I will heal by a different dimension.

Healing by a shadow is okay but it is not supposed to be a testimony for the church; that is stagnation. It is not wrong to do miracles and all these things but what we ought to ask ourselves is; are we stagnant or are we moving forward?

Of the Latter Glory

Once, as I flipped through television channels, I watched a magician say that he was going to do something that was going to be talked about in that city forever. He stood on a building several stories high and walked downwards as though he was on a horizontal surface. If a magician can do that, how about me? Christians cannot even walk on water yet we claim that there is revival in our land. It is not that the magician is supposed to teach me God. But what power can the magician have  versus the power that the child of God has?How can you walk to such a man and tell him that Jesus loves him? What sort of gospel can convince him to come to Christ?

When the Bible says that knowledge shall increase, isn't there supposed to be an expectation that the glory must increase? Christ speaks of coming for a gloriuous Church, one without spot or wrinkle. Many people quote the portion of 'without spot or wrinkle' but they do not quote the bit of glorious. He did not say a sinless Church. He knows that sinlessness is part of it but it is not the whole picture. He wants to present a glorious Church without spot or wrinkle. He has weighed the places of offence. Sometimes the places of offence are not when a man steals and lies but when men cannot judge with knowledge and so they cannot examine the things that are most excellent.

When the lord shares a place of knowledge increasing and the Church has to adopt,  my fear is the place of stagnation as a Church  yet we think we are moving ahead. Indeed, in every generation there is a healing,  prophetic, evangelistic and pastoral arm. However, sometimes all that is God continuing his work for his name's sake and not necessarily the adoptation and mutation of the Church into a certain picture of increase and progress.

The Bible says that the glory of the latter chruch shall be greater than the glory of the former. Do you realise that he is speaking of a very big pricture as regards the glory that we are supposed to be having?

Of the Phillip Experience

Let me give you an example, that of Philip. Philip lived at the time of the beginning of the early Church.  That was a time when knowledge was not as it is now. If knowledge increases in the last days, we are supposed to know more than Philip. An angel spoke to Philip, he preached to the Ethiopian eunuch and when he was done, the scriptures say that the spirit of the Lord carried him. He was caught by the spirit and he was found in Azotus[Acts 8:26-40].

If God had said that he found himself in Azotus, it would have meant that it was a shock to Philip but the truth is that what happened  was not a shock to philip. It was a shock to them who found him in Azotus. Philip had a certain relationship with God by which it was not a miracle that he was caught up. That is why the Bible does not say that  when he was found in Azotus, he testified about it but rather, the Bible says that he continued to preach in all the cities. Disappear form one place and appear in aother.You don't even have to tell them that you diasppeared and appeared in another place. You just continue peaching like nothing happened.

God uses the language 'found in Azotus' and not him 'finding himself in Azotus'. It means that from the onset, that morning, when God told him to preach to the eunuch, the spirit of the Lord had already ministered to Philip the entire day's program. He knew that at midday he would preach the gospel to the eunuch and then go to Azotus and continue with his preaching.  Today, the highest level I have known men to experience of this is when they say that they are caught up in the spirit.

I have had spiritual experiences. I have been carried by the spirit and attended meetings, but now, I want more. I do not want to be caught up in the spirit. I want to finish Phaneroo, disappear, appear in Amseterdam, preach the gospel in Amsterdam, be caught up and be found in Newyork City, preach the gospel in Manhattan and be caught up and found in Libya Tripoli then come back to Kampala for dinner like nothing happened. God help us. If we cannot do these things then there is something wrong.

He Bloweth the Flesh Away

1 Peter 1:23-25 says; Being born again, not of corruptible seed, but of incorruptible, by the word of God, which liveth and abideth for ever. For all flesh is as grass, and all the glory of man as the flower of grass. The grass withereth, and the flower thereof falleth away: But the word of the Lord endureth for ever. And this is the word which by the gospel is preached unto you.

He was speaking of being born by an incorruptible seed. Some people  think that being incoruptible entails only not  sinning. That is just part of it. However, incorruptible means that you cannot be corrupted.

The adamic nature is already corruptible. The place of corruptibility is its limitation in functioning in the spirit realm. You can never speak of corruption without defining the transcendence of the other world. Corruption is not what you see here on the earth. Corruption is primarily what is spiritual.

In that scripture, Peter was actually quoting Isaiah.  In Isaiah 40:6-7, it says;

The voice said, Cry. And he said, What shall I cry? All flesh is grass, and all the goodliness thereof is as the flower of the field: The grass withereth, the flower fadeth: because the spirit of the Lord bloweth upon it: surely the people is grass.

What in a man is glory? This is anything that you know can be accomplished by man. That is what the spirit of God is blowing away such that when men look at us, they will realise that we are more than mere men. It is one thing when people call us men of God but it is another if they don't know anymore whether we are men or spirits.

The only thing that takes away the glory of the man is the spirit of the Lord. The next line says that the word liveth and abideth forever. This is what God is doing. By his spirit, he is blowing away our flesh and perfecting the manifestation of the word  in us that in the end, men will not say that that over there is Pastor Nickson  but they will say that that is the word.