Home → Phaneroo → It Is A Covenant Issue

It Is A Covenant Issue 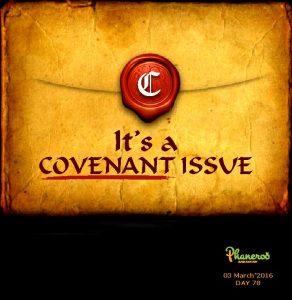 Many people do not respect the power of the covenant they are under.  Understand that the first victory of David was without a sword.  He did not quote a scripture. It is not that the scriptures are not profitable or important, no. He simply went into the covenant. He knew that there are certain things that he had to become simply because he is circumcised.  He had respect for the covenant under which he was. He looked at this giant and it did not matter how tall he was because of the covenant that he was under.

When Paul says, ‘brethren we are persuaded of better things that accompany salvation’, it means that when it comes to the things that follow you because you are Born Again, Paul said, he was persuaded. I have learnt that there are things that cannot happen to me, not because I prayed last night or fasted on Tuesday but because I carry a certain covenant.

This is about more than just the sword; first understand the covenant. That is why when Saul gave him the sword and the armor, he did not take them. He trusted the covenant. I may not know how to use a sword but I am circumcised. He knew that because of the covenant, even if he was to use a small stick, it would still have killed the enemy. The Baganda say that when you are on the wrong side of fate, even a banana can break your tooth. The devil is on the wrong side!

Job 9:20 says; Nay but, O man, who art thou that repliest against God? Shall the thing formed say to him that formed it, Why hast thou made me thus?

When Goliath was approached by David, his words were, ‘Am I a dog?’ The question is, Did David say he was a dog? Why did he think he was a dog? He was seeking a place of justifying himself and his own mouth condemned him. The place that leads to our condemnation is when we justify ourselves without the understanding of how a man is truly justified.

Romans 8:33 shows us what true justification is. It says; who shall lay anything to the charge of God's elect? It is God that justifieth. In this covenant that you and I have, we do not justify ourselves. It is God who justified us. Before you were formed in your mother’s womb, he knew you and called you, he had a pre-program regards you. That is why I tell people that the only reason why you can die early is if you don’t know what is in you. The bible says that God has invested too much in Israel to give up on her.

Goliath justified himself. The difference between us and Goliath is that God justifies us. In other words, I am not rich because I said I am rich. I am rich before I even say it; God did it.  That is the justification.

Hebrews 8:6-8 AMP says; But as it is, Christ has acquired a [priestly] ministry which is more excellent [than the old Levitical priestly ministry], for He is the Mediator (Arbiter) of a better covenant [uniting God and man], which has been enacted and rests on better promises. For if that first covenant had been faultless, there would have been no occasion for a second one or an attempt to institute another one [the new covenant]. 8 However, God finds fault with them [showing its inadequacy]

The Christ has obtained a far more excellent ministry based on a better covenant. The old covenant was a problem because it made you faulty. In its own, it was not faulty. He could have said, ‘and finding fault with it’, but he did not have a problem with it, he says, ‘finding fault with them’. The problem was that every time that covenant would come to you, God would have issues with you. So he removed the covenant that creates issues between him and people and replaced it with the one that did not put issues between him and them.  Every time he looks at this covenant, he justifies you. He looks at it and sees you right for everything in Christ is ye and amen. It is a covenant issue.