The Phaneroo Devotion: The Guilt Question - 1

Romans 8:1(KJV); There is therefore now no condemnation to them which are in Christ Jesus, who walk not after the flesh, but after the Spirit. 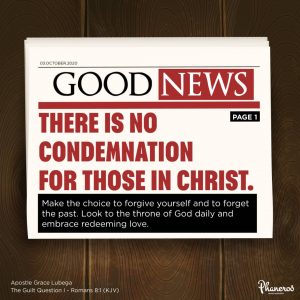 Guilt is a spirit. It is the anticipation of consequences of one’s wrongs and the reason why some Christians cannot boldly approach the throne of grace.

There are those who have received the righteousness of God and believe it; they know that they have been forgiven and that their sins have been cast as far as the East is from the West but they have never dealt with the issue of guilt.

To them, every present difficulty is linked to some past wrong.

That is not the language of a man or woman who has understood the blessed gift of righteousness in its entirety.

The apostle Paul, aware of his past crimes in persecuting the church and of the blood of saints like Stephen that was on his hands had to make a bold choice.

There is no condemnation for those in Christ. Make the choice to forgive yourself and to forget the past. Look to the throne of God daily and embrace redeeming love.

GOLDEN NUGGET: There is no condemnation for those in Christ. Make the choice to forgive yourself and to forget the past. Look to the throne of God daily and embrace redeeming love.

PRAYER: Father, I thank You for this truth. I received and embraced Your grace and it is the reality of my life. My eyes are set on You and not on my past. In Jesus’ name, Amen.