The Phaneroo Devotion: I Believe - 2

Mark 9:23 (KJV); Jesus said unto him, If thou canst believe, all things are possible to him that believeth. 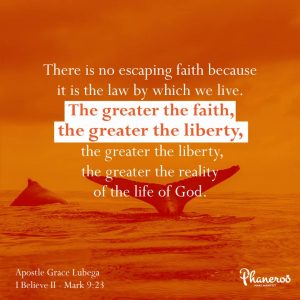 A story is told of an elderly lady who was asked how she could believe fanciful tales in the Bible like that of Jonah. It beats even the wildest stretches of human imagination that a man would be swallowed by a big fish, snuggle in its belly for three days and get spat out alive.

To this bit of cynical scepticism, the woman simply said, “Even if the Bible had said that Jonah had swallowed the fish, I would still believe it.”

That is the almost surreal quality of pure faith when not tainted by the jaded views of realism.

This unflinching regard for His word that borders on insanity and brushes the edges of foolishness in the mind of the world is the kind of faith that God expects from us as believers.

The Apostle Paul in 2 Corinthians 5:13 throws down the gauntlet before those who defy extreme faith and says, “If we were out of our mind, it is for God.”

A simple glance down the line of our forebearers in the faith will reveal a sequence of men and women accused of varying stages of insanity because they dared to believe God.

But what remarkable lives they lived! Seas parted, axes floated, walls fell and the dead were raised!

Make room in your spirit for crazy things because, by this, you curve your place on the great wall of faith.