Home → Phaneroo → We Are The Body

We Are The Body

Acts 9:3-6(AMP); As he traveled he approached Damascus, and suddenly a light from heaven flashed around him [displaying the glory and majesty of Christ]; and he fell to the ground and heard a voice [from heaven] saying to him, “Saul, Saul, why are you persecuting and oppressing Me?” And Saul said, “Who are You, Lord?” And He answered, “I am Jesus whom you are persecuting, now get up and go into the city, and you will be told what you must do.” 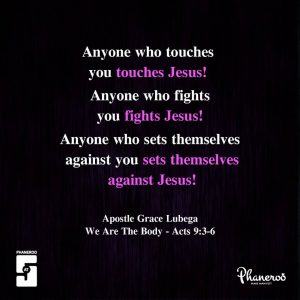 When our Lord and Master appeared to Saul on his way to Damascus, He did not ask him why he [Saul] was persecuting the Church or question him on why he was oppressing His people.

The Lord’s language is clear; He asked, “Saul, Saul, why are you PERSECUTING AND OPPRESSING ME?”

When Saul attacked the Church, He launched an attack against the Lord of heaven and earth Himself.
He told him, “It is hard to kick against the pricks.”(Acts 9:5). He meant that Saul had picked the wrong battle.

Anyone who touches you touches Jesus!

Anyone who fights you fights Jesus!

And God has defined the end of such an attempt. “It is hard…”

Whoever it is cannot win.

Walk with the confidence that you are the apple of His eye (Zechariah 2:8).

Live in the understanding that you and Him are one and what cannot defeat Him can most definitely not defeat you.

His name be praised.

PRAYER: Loving Father, I thank you for this Word. I stand in the liberty of knowing that I am yours; in you I live, move and have my being. You are my fortress and my shield. I stand in the confidence that nothing can destroy me because when they touch me, they touch you. In Jesus’ name. Amen.