Home → Phaneroo → Things That Make Ministers: The Travails Of Gesthemene

Things That Make Ministers: The Travails Of Gesthemene

Luke 22:41-44(KJV); And he was withdrawn from them about a stone’s cast, and kneeled down, and prayed, Saying, Father, if thou be willing, remove this cup from me: nevertheless not my will, but thine, be done. And there appeared an angel unto him from heaven, strengthening him. And being in an agony he prayed more earnestly: and his sweat was as it were great drops of blood falling down to the ground. 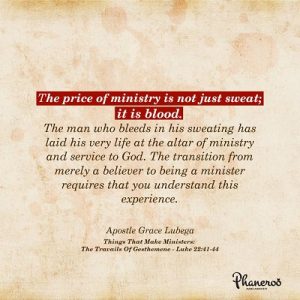 Success in ministry is not by mistake; no one automatically becomes a great man of God.

Sometimes, people admire the manifestations of the anointing, the increase in numbers of congregants, the opportunities to stand before thousands and minister Christ but they never ask how the man or woman of God got to that place in the first place.

There are tests child of God.

Christ is our true pattern in all of this.

His travails in Gethsemane point to the groans, travails and the bleeding that makes men true ministers of the gospel.

Our Lord and master cried unto God, “if thou be willing, take this cup from me….”

It means that there are times when you will be pushed to give up. Things may come against you that will make you want to throw in the towel but God will always strengthen you like he sent the angels to strengthen the Christ.

In Gethsemane, our Lord bled. This is the bleeding of the minister that aligns him or her to divine assignment.

There are men who merely sweat; they labour greatly for the sake of the gospel; they are faithful servants in the Kingdom of God and have given their all for the furtherance of the gospel.

The man who bleeds in his sweating has laid his very life at the altar of ministry and service to God.

This bleeding shows us that the price of ministry is not just sweat; it is blood.

The transition from merely a believer to being a minister requires that you understand this experience.

His name be praised!

The price of ministry is not just sweat; it is blood. The man who bleeds in his sweating has laid his very life at the altar of ministry and service to God. The transition from merely a believer to being a minister requires that you understand this experience.

PRAYER: Father, I thank You for this Word. God, I am available as one You have equipped and trained for ministry. If there be tests, trials and travails, I choose to yield my spirit to Your will and not mine. I understand the cup and the blood of the minister and like Paul, I choose to endure hardness like a good soldier with my eyes set on the prize of heaven. In Jesus’ name. Amen.