Home → Phaneroo → The Presence Of God

The Presence Of God 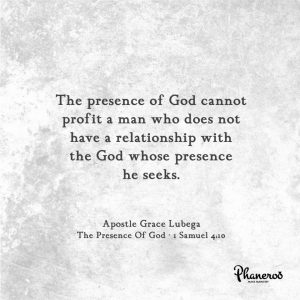 The scriptures give an account of a battle between Israel and the Philistines where Israel suffered a terrible defeat.

In 1 Samuel 4:2, the Bible reveals that four thousand men of Israel were killed at first.

After this defeat, the men of Israel decided to bring the Ark of the Covenant into their camp. They rejoiced greatly when this was done because they assumed that its presence in the camp was the guarantee of victory.

Thirty thousand men were killed during that battle. Israel suffered a greater defeat when the Ark of the Covenant came into the camp.

With the very presence of God in their midst, thousands of them died.

Why would men with the very presence of God be defeated?

These men sought His presence without an understanding of the God of the presence.

They sought for victory without understanding the God of victory.

They brought him to a war without understanding the God who fights and wins wars.

The presence of God cannot profit a man who does not have a relationship with the God whose presence he seeks.

The presence of God is the reality of His Person. It is Him telling you, “I am here, feel me.”

You cannot walk in this reality without the intimacy of relationship.

Do not simply desire the presence of God, purpose to also know Him personally.

The presence of God cannot profit a man who does not have a relationship with the God whose presence he seeks.