Home → Phaneroo → The Pangs Of A Minister

The Pangs Of A Minister

Galatians 4:19 (KJV); My little children, of whom I travail in birth again until Christ be formed in you. 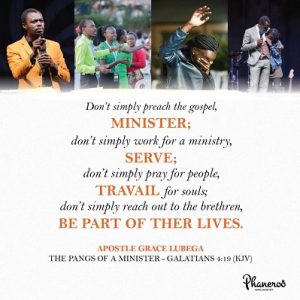 Paul, in our theme scripture speaks of his travail as a woman in birth for Christ to be formed in men.

He understood that it is one thing for you to receive Christ as your Lord and saviour at the point when you got Born Again, but it is another for Christ to manifest through you.

God appoints ministers over you to mature you into that manifestation.

Yet for the minister to take men through this process, he or she is likened to a woman having birth pangs!

This is another level of ministry!

It is not for those ministering merely because they have been invited to preach or because they have the opportunity to serve in a ministry. This is for those who carry the genuine burden of the gospel.
These are men and women who can die for people who will neither appreciate nor understand the things they did in this gospel.

They are not on the lookout for cameras and microphones to amplify their voices and be seen by other men. Such ministers will never seek any honour, because they feel obligated to serve and not to be served!

Such men laboured alongside Paul. He speaks of his brother and fellow worker in Christ, Epaphroditus and says “because for the work of Christ, he came close to death, not regarding his life, to supply what was lacking in your service toward me” (Philippians 2:30).

Another example is of Priscila and Aquila. The Bible speaks of the time when Apollos began to speak boldly in the synagogue; Aquila and Priscilla heard him, took him aside and explained to him the way of God more accurately (Acts 18:26).

Aquila and Priscilla were not ‘famous’ ministers of the gospel, but on perceiving that Apollos’ knowledge was imperfect, they laboured to instruct him in the fullness of the truth of the Gospel.

As a result, when Apollos arrived in Achaia, the Bible reveals that “he greatly helped those who had believed through grace; for he vigorously refuted the Jews publicly, showing from the Scriptures that Jesus is the Christ” (Acts 18:27-‬28).

This story is proof of Christ being formed in a man after another man’s labours in the Gospel. Through the labours of Priscila and Aquila, Apollos was perfected in knowledge and became a greater minister of the Word.

God is calling upon you as a minister to seek after the testimony of labours that form the very substance of the resurrected Christ in other men.

PRAYER: Father, I thank you for the Gospel and the power of salvation in me. I thank you for they that begat me into this Gospel, and labour tirelessly that Christ may be formed in me. With such people in my life, I cannot live an ordinary life, nor have ordinary impact in my generation because I carry a clear understanding of the way of God and the ways of His ministers. I walk in the very testimony of the resurrected Christ; infusing life in everything in my proximity. In Jesus’ mighty name. Amen.