Home → Phaneroo → The Concept Of Numbers

The Concept Of Numbers

John 6:2(KJV); And a great multitude followed him, because they saw his miracles which he did on them that were diseased. 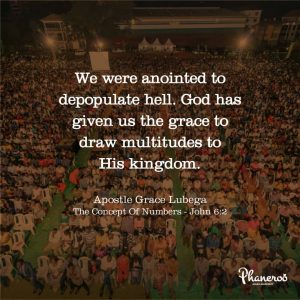 One day, a man opined that instead of building mega churches, Christians instead ought to build mega homeless shelters.

Well, that kind of reasoning is flawed.

Firstly, spiritual depravity is a greater evil than homelessness and the spiritually depraved are more than the homeless.

Secondly, we were anointed to depopulate hell. God has given us the grace to draw multitudes to His kingdom.

There is nothing wrong with having a mega church; Christ in essence had one.

He was followed by multitudes like our theme scripture reveals.

Paul too drew multitudes. At one point, he preached a message and the next day, almost the entire city showed up to listen to him (Acts 13:44).

This gospel is about people.

No minister of the gospel should feel complacent about a small congregation in a city of thousands that do not know Christ.

No man or woman of God should be comfortable with a few members in a nation of millions that do not profess Christ.

Every empty chair ought to speak, to provoke us past indifference to the winning of souls.

We were anointed to depopulate hell. God has given us the grace to draw multitudes to His kingdom.

PRAYER: Loving God, thank you for this great wisdom for today. What a truth! You have graced me with influence over multitudes. I receive it as my portion for the glory of your name. Regardless of my station Abba, I know that I am called to touch many. My ideas are for multitudes; my message is for multitudes; the wisdom upon my life is for the profit of many. In Jesus’ name. Amen.