Home → Phaneroo → Christ Above The Elements: Beyond The Physical Body

Christ Above The Elements: Beyond The Physical Body

Luke 22:19-20 (KJV); And he took bread, and gave thanks, and brake it, and gave unto them, saying, This is my body which is given for you: this do in remembrance of me. Likewise also the cup after supper, saying, This cup is the new testament in my blood, which is shed for you. 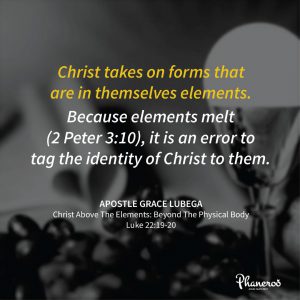 Christ takes on forms that are in themselves elements.

Because these elements eventually melt (2 Peter 3:10), it is an error to tag the identity of the Christ to them.

In our theme scripture, the bread was an element and this bread represented the body of Christ.

The bread, which was an element was broken and this was the same experience of the bruising and crashing of His body.

When explaining His manifestation in the flesh, the Bible says “And the Word (Christ) became flesh (human, incarnate) and tabernacled (fixed His tent of flesh, lived awhile) among us; and we [actually] saw His glory (His honor, His majesty), such glory as an only begotten son receives from his father, full of grace (favor, loving-kindness) and truth.”(John 1:14 AMP).

It was not intended that Christ should walk and minister in the body forever because His body was an element.

This is why we no longer regard the Christ in the flesh (2 Corinthians 5:16) and look at the Christ ABOVE THE ELEMENT OF HIS PHYSICAL BODY who is the person of the Word in breadth, height, length, width and depth. Hallelujah!

Christ takes on forms that are in themselves elements. Because elements eventually melt (2 Peter 3:10), it is an error to tag the identity of the Christ to them.

PRAYER: Father, I thank you for your salvation. I thank you for the truths you reveal to me every day. Today, I choose to look past the forms through which the Christ ministers to His very person. I behold the broadness of His person in the Word, His depth, Height and lengths. As I behold, I become. I am broadened by the Word, launched deeper by the word and elevated higher by the Word. In the name of Jesus. Amen!