Proverbs 22:28 (KJV); Remove not the ancient landmark, which thy fathers have set. 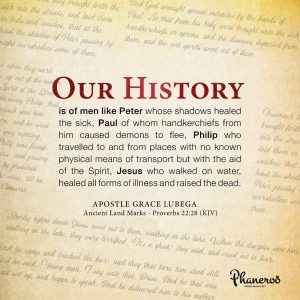 I have often mentioned that if Jesus lived in this present day, he would be too radical to be accepted in some churches.

If Moses lived today and dared turn a rod into a snake, he would rank high on the charts of those considered to be “cult.”

The average response to the miraculous in our generation swings between apathy and hostility.

I once questioned why this was so and came to the realisation that some Christians do not believe biblical truths because the ancient land marks were removed.

The reality of the true Christian life has been diluted and compromised by the opinions of men and subjected to the power of reason.

But the history of the Church is rich with men of great exploits. These were generals and pioneers of the faith who believed the Word in its entirety and walked in its realities every day of their lives.

Alexander Dowie shocked the world with the healing power of GOD.

When the plague hit South Africa, John G Lake was scientifically proven to be immune. Under microscopic scrutiny, the bacteria was found to die the moment it touched his skin.

Maria Woodworth Etter raised her hands to the GOD she believed and people, miles away would fall under the power of GOD.

Our history is of men like Peter whose shadow healed the sick (Acts 5:15), Paul of whom handkerchiefs from him caused demons to flee (Acts 19:11-12); Philip who travelled to and from places with no known physical means of transport but with the aid of the Spirit (Acts 8:26-40); Jesus who walked on water, healed all forms of illness and raised the dead.

That is our heritage! A believer can do all that and more(John 14:12). Hallelujah.

Our history is of men like Peter whose shadows healed the sick, Paul of whom handkerchiefs from him caused demons to flee, Philip who travelled to and from places with no known physical means of transport but with the aid of the Spirit, Jesus who walked on water, healed all forms of illness and raised the dead.

PRAYER: Father, I thank you for this Word. I understand our roots and appreciate where we are headed as a body of Christ. Because I have applied my heart to understand, I do and contribute my part to the great cause of the gospel to the glory of your name. Amen.